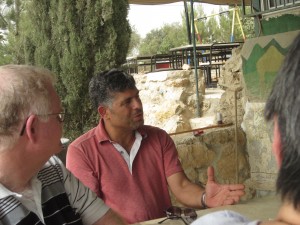 Daoud Nassar described his efforts to maintain the claim to his family’s farm.

After our visit to the Church of the Nativity, we drove to the “Tent of Nations,” an environmental and educational farm in the Palestinian Territory. The Tent of Nations does not look like a modern farm. You cannot see any large barns or modern cultivation machinery. Instead, it has a few older buildings, a flock of goats, and orchards of olive trees. There we met Daoud Nassar, a Palestinian Christian whose family has owned the farm since 1916. He has papers, he proudly said, to prove it. The Tent of Nations invites people to address cultural conflicts, such as the Israeli-Palestinian conflict, by practicing non-violence and reconciliation. Daoud maintains the Nassar land by planting trees and by practicing a self-sustaining lifestyle. 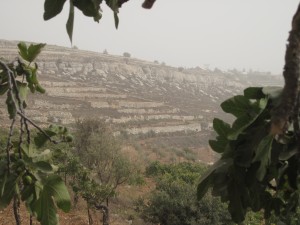 The Tent of Nations is on the Nassar family farm.

To get to the Tent of Nations, our tour bus parked at route 60 and Ha-Moriya Street. The well-paved street leads to the modern Israeli settlement of Neve Daniel, but we didn’t take it. Instead we turned left, walking on a poorly paved road that led to the Palestinian village of Nahalin. Twice we came to enormous boulders that had been placed across the road by the Israeli military, blocking vehicle traffic. The only way to drive to Nahalin was via the roundabout route 3676. “The boulders in the road, military intimidation, and demolition threats” faced by the Nassar family have been verified by independent Jewish journalist Ben White. After a half-hour walk in the direction of Nahalin, we reached the Nassar property, the Tent of Nations. 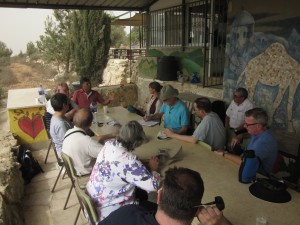 The Tent of Nations aims at non-violent reconciliation.

There Daoud related the history of his family’s effort to retain its land. In 1991 he said, the Israeli government declared the entire area (including the Nassar land) to be Israeli state property. But the Nassar family challenged Israel’s declaration. The family had its original deed from 1916, when the Ottomans ruled, and had paperwork from the British and Jordanian periods. These documents were the basis for the family’s claim against Israel. In 2001, while the land case was still in the courts, the local council of Israeli settlements decided to open a road through the east side of the Nassar land. The family hired an Israeli company (at a cost of $70,000) to verify the family’s property claims. This halted construction of the road before it ever began. The case of the Nassar family is still in the Israeli courts. 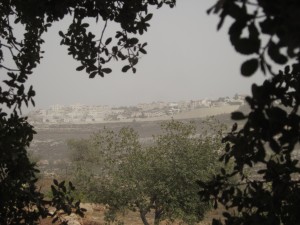 The Israeli Settlement of Neve Daniel overlooks the Nassar property.

The problem is that the Nassar family land is located where the Israelis want to build settlements. On one side of the land is the Israeli settlement of Neve Daniel. According to Wikipedia, “The international community considers Israeli settlements in the West Bank illegal under international law, but the Israeli government disputes this.” The approximately 2000 people who live in Neve Daniel include native Israelis and immigrants from the former Soviet Union, France, Canada, and the USA.  The majority are religious Zionists. 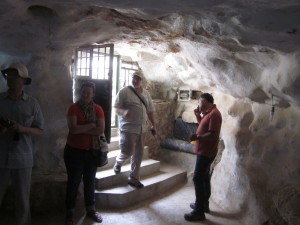 This is the cave on the property where Daher Nassar (Daoud’s grandfather) once lived.

On the other side of the Nassar land is Kibbutz Rosh Tzurim. Founded by the Israeli religious scouting movement in 1969, it has a population of about 730. Like Neve Daniel, Kibbutz Rosh Tzurim is considered illegal under international law.  Under Israeli law, however, the land is a part of Jerusalem, not Palestinian territory. Daoud gave a powerful testimony about the Nassar land. He wants to preserve it for his family and to show that it is possible to resolve the property dispute in non-violent ways.

We were deeply impressed by the Tent of Nations, and were looking forward to our visit to the Christian Quarter of the Old City of Jerusalem