On October 19, Brother Pierre gave the Tantur participants a tour of the Russian Orthodox Church of St. Mary Magdalen on the Mount of Olives in East Jerusalem.  Designed by David Grimm, the church was constructed in 1886 with seven gilded onion domes.  Above the iconostasis is an enormous painting of St. Mary Magdalene.  It depicts a legend in which the saint protests the unfair trial of Jesus, presenting the emperor with a red egg symbolizing the resurrection.  The church contains two martyred saints, Grand Duchess Elizabeth Feodorovna of Russia and her companion, Varvara Yakovleva. After the duchess’ husband was murdered by the Bolsheviks, she became a nun before she too was captured and executed.  Their bodies can be seen in their coffins under glass lids, covered by palls. 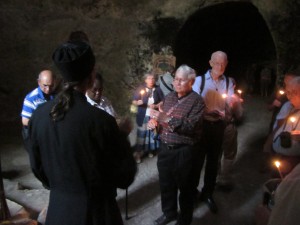 Br. Pierre explains the Tombs of the Prophets.

The Tantur participants returned on October 24 to participate in an evening prayer at the church.  But before the service, we met Br. Pierre higher up on the Mount of Olives at the Tomb of the Prophets.  This site is an ancient cave with a number of burial niches, some of which have been dated to the time of Jesus.  They gave us a good idea of what the tomb of Jesus might have looked like.  We then walked down the steep street, the Good Friday pilgrim causeway, to the Magdalene Church. 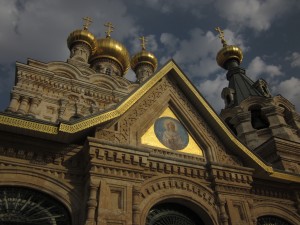 Gold sparkles on the Magdalene church.

The Russian Orthodox evening prayer was conducted in the Slavonic language.  It began at dusk, and went on for more than an hour.  The priest’s chant was answered by a tuneful female choir with great stamina that articulated the words rapidly and precisely.  The church became warm, and one of the nuns opened the window behind us.  The sound of the muezzin, calling the Muslim faithful to prayer at the Noble Sanctuary, drifted into the chapel, creating a strange dissonance.  I must have drifted into sleep when we were summoned to return to Tantur, even before the prayer was finished.