On September 21, we visited the ancient City of David.  Its ruins are not actually located in Jerusalem’s Old City, but down the hill from the south wall of the Temple Mount.  Jared Goldfarb, our guide, reminded us that David did not build the Jerusalem Temple.  He had sinned by sending Bathsheba’s husband off to die, and then by marrying her.  It was Solomon, the child of that union, who actually built the Temple.  So a visit to the ancient City of David transported us to a time before the temple, circa 1000 BC. 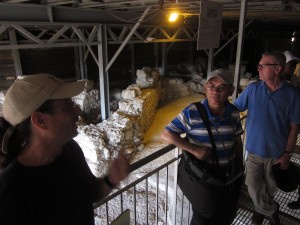 The ruins have been excavated for decades in the hope of turning up evidence that would link the City of David to the biblical David. Hundreds of clay seals with writing have been discovered. Unfortunately, however, none of the seals refers to anyone from a period prior to the eighth century BC. In the absence of such proof, some scholars wonder, Jared said, about the veracity of the biblical stories about the Patriarchs, Moses, and the Judges.  But there is more to biblical history than empirical proof. 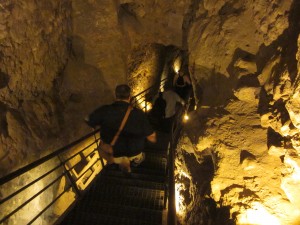 We descended to the Gihon Spring.

The most exciting part of our visit was at the bottom of the ancient city. There we found the Gihon Spring, a natural water source that flows from the limestone rock.  In 1867, a British explorer named Charles Warren found a 5o-foot vertical shaft that led from the spring to the city.  He hypothesized that it was the gutter up which David and his men had climbed in order to take the city from the Jebusites (2 Sam. 5:8).  Later research showed that Warren was wrong.  The shaft, which provided access to the spring, had been carved by the Israelites themselves.  Later a water tunnel was built, Hezekiah’s Tunnel.