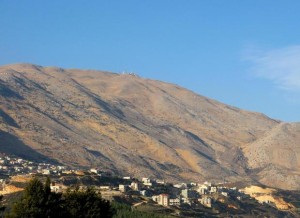 Leaving Banias, we drove towards Mount Hermon (9,232 ft.), the highest peak in the area.  Its summit straddles the border between Syria and Lebanon.  We passed the ruins of the medieval Muslim castle known as Nimrod’s Fortress (which used to guard the western access to Damascus) and drove through Majdal Shams. It is the largest of the four remaining Druze-Syrian communities on the Israeli-occupied side of Mount Hermon, together with Ein Qiniyye, Buq’ata, and Mas’ade. In Mas’ade we ate beside the volcanic lake of Birkat Ram. 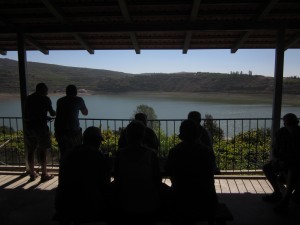 The Arabic-speaking Druze broke off from Islam in the 11th century.  They call themselves unitarians (Al-Muwahhideen) because they synthesize elements of Judaism, Christianity, and Hinduism, as well as Gnosticism, Neoplatonism, and Pythagoreanism. Socrates, Plato, Aristotle,  and the Egyptian Akhenaten are among their spiritual teachers, along with their own prophets Hamza and Al Hakim. They believe in the reincarnation or transmigration of souls from one Druze to another. 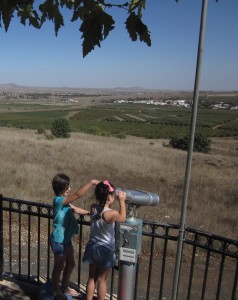 From Avital Park we could see Syria,

Apples are grown in Mas’ade, and I bought a dozen from an elderly Druze woman.  Returning from lunch we stopped at Avital Volcanic Park, from which we could see the border between Israel and Syria. A large UN compound stood between us and the dividing wall, and the mountain behind us bristled with radio and other gear enabling the Israeli Defence Forces to monitor Syria.  The nearest Syrian village, Kuneitra, had been destroyed by Israel in 1974, and the Syrians had left it in ruins as a memorial to what they consider Israeli aggression.  We were glad to leave the Golan Heights and return to the Sea of Galilee, where we visited the Greek Orthodox Church of the Twelve Apostles.