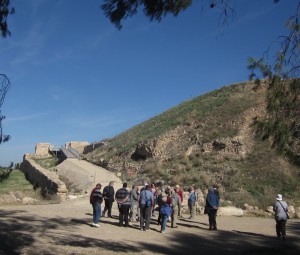 The Judean Shephelah was our destination on November 25.  It is a lowland in south-central Israel that extends between Mount Hebron and the coastal plain.  During the time of the conquest of Canaan, the Shephelah was allotted to the biblical tribe of Dan (Joshua 19:40-41).  We began our tour at Tel Lakhish, the ruins of a city that in ancient Israel was second only to Jerusalem. According to the prophet Jeremiah, Lachish was conquered in 701 BC before Jerusalem by Sennacherib, the Assyrian king (Jer. 34:7).

The Bell Cave was carved in chalky limestone.

We then visited Beit Guvrin-Maresha National Park. Maresha was an important town of Judah during the time from King Solomon until the Babylonian Exile.  The caves of Maresha have been inhabited at least since Joshua conquered Canaan. The town was destroyed in 40 BC by the Parthians (fighting at the Hasmoneans’ request).  For a time they defeated Herod (and his Roman allies).  We climbed into one cave, an enormous columbarium, whose walls were dotted with little pockets for nesting birds.  Another was a burial cave whose paintings and inscriptions suggest that it was decorated by Sidonians.  But the most impressive were the Bell Caves, dug during the Arabian Period for chalk to cover roads. They are so vast that they must have taken centuries to dig.  I felt as if I were in the presence of a natural wonder, not a human creations. 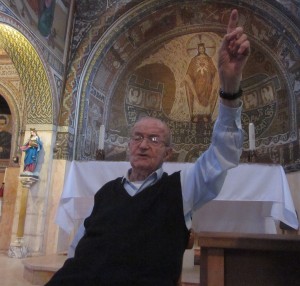 Our final stop was the Salesian Monastery of Beit Jamal.  Fathers Domenico and Antonio explained that the word “Jamal” is related to the word “Gamaliel,” who was the teacher of St. Paul.  According to a priest named Lucian, writing in 415, the remains of Gamaliel, his son Abibos, and St. Stephen and Nicodemus were buried in Beit Jamal.  Archaeologist Andrzej Strus found an inscription at Beit Jamal. It proves that Byzantine Christians considered the site to be the burial site of St Stephen, Gamaliel, Nicodemus and Gamaliel’s son Abibos. In 1881, the Palestine Exploration Foundation noted that a “Mukam” or field half a mile from Beit Jamal was named after Saint Paul.