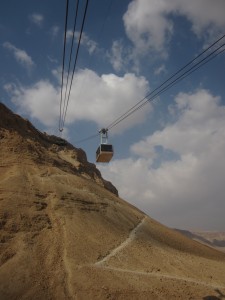 The tram rises above the “Snake Trail.”

Masada is a mountaintop fortress west of the Dead Sea that we visited on November 18.  Between 37 and 31 BC, Herod the Great enlarged an existing fortress, but it is not exactly clear what purpose it served.  A century later, Jewish rebels against the Roman Empire overcame the garrison and took refuge at Masada.  In retribution, the Tenth Roman Legion besieged the hilltop fortress. To starve out the rebels, they built a a siege wall around Masada.  When the rebels did not yield, the Romans constructed a ramp so that battering rams could breach the walls.  In 73 AD, after penetrating the walls, the Romans discovered that the 960 inhabitants had set all the buildings ablaze except the food storerooms.  Then they committed mass suicide or killed each other. 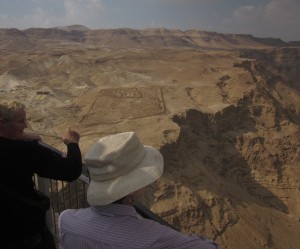 Below Masada are the remains of a Roman camp.

We know about Masada from the Jewish historian Josephus, who had served in the rebel army.  When he was captured, he told Vespasian that Jewish prophecies had foretold his future as Emperor of Rome. Vespasian allowed Josephus to live as a slave and an interpreter, and he eventually became a citizen of Rome.  So his book The Jewish War describes events such as the siege at Masada in a way that glorifies Rome.  The Masadan rebels, Josephus wrote, were a violent group, “the Sicarii,” who had massacred 700 women and children at the nearby spring of En Gedi. 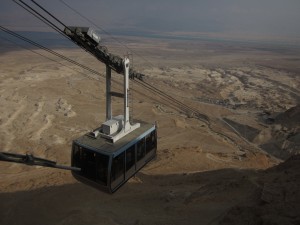 The gondola returns from the Masada mesa.

According to Josephus, the rebels drew lots in order to organize their deaths and suicide.  Versions of the story emphasize the bravery of the Jews.  Our guide Jared said that, for many years, Israeli Army soldiers were sworn in at Masada to inculcate an ethos of courage. Modern archaeologists question the veracity of the Josephus account, because archaeological evidence does not support many details. Mass suicide and murder are not the best illustrations of bravery.  We left Masada and drove to the Negev Desert.