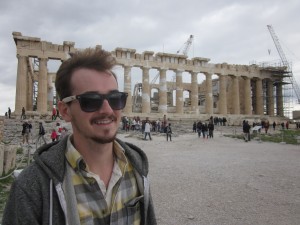 Paul Fischer felt the wind on the Acropolis.

Our October 30 tour of Athens began with a visit to the Panathenaic Stadium and ended at the National Archaeological Museum.  It was cloudy and windy as we walked through the Propylaea to the top of the Acropolis. The Parthenon was in scaffolding.  I hadn’t been there for forty years, but I was grateful, because no one can see it, I think, without being awestruck. Maintaining the Parthenon — constructed 447-432 BC, and partially destroyed by a Venetian cannon shot in 467 — requires constant work. 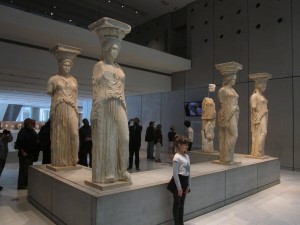 A young girl poses near the karyatids.

Almost half of the sculptures of the Parthenon and other Acropolis buildings were removed by Lord Elgin from 1801-1812.  He placed them in the British Museum, and the Greeks have wanted them back ever since. Elgin took, for example, one of the six karyatids, or columns in the form of a young woman, from the Erechtheion, a 5th-century temple. The remaining five are in the Acropolis Museum, with copies now supporting the Erechtheion porch. The new Acropolis Museum has special niches for the Parthenon friezes taken by Lord Elgin, should Britain ever choose to send them back. 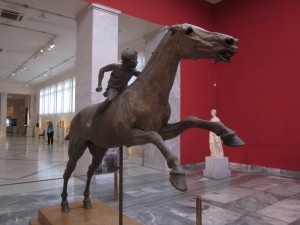 The Jockey of Artemision dates from 150 BC.

After lunch we visited the National Archaeological Museum and saw two bronze statues recovered in 1926 from a shipwreck off Cape Artemision.  The older is the “God from the Sea,” a 5th-century depiction of either Zeus or Poseidon in the “severe style,” like that of the Charioteer of Delphi.  The other is the “Jockey of Artemision,” from about the second century.  Scholars theorize that both sculptures may have been looted by Romans after the Achaean War in 146 BC. The water preserved the bronzes for seventeen centuries.