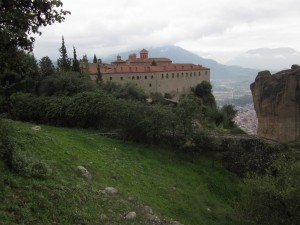 We visited the Monastery of St. Stephen first.

October 29 was cloudy and cold.  We drove high into the mountains above Kalambaka to see the monasteries of Meteora.  When we arrived at St. Stephen, the gate was not open.  Our guide Stathis had expected it to open at 9:30, but there was a half-hour delay.  While we waited, he told us that the monastery began as a small structure in the 16th century, and grew over the centuries.  Nazi soldiers shelled it during World War II, believing that the monastery held insurgents.  Today the monastery has been rebuilt by a congregation of nuns. 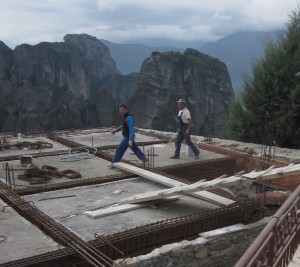 Greek Orthodox chapels are covered with icons. They present us with a unique perspective on holiness and the world. In them, mountains are out of proportion. Colors defy the everyday palette.  Faces are elongated and framed by halos. Contemplating them, believers may compare their ordinary way of thinking with that of the iconographer, who may draw them from an ordinary understanding of reality to a more spiritual viewpoint.  The icons reminded me of the Platonic dialogues.  What we think we know can be challenged by another, whose different viewpoint enlarges our own. 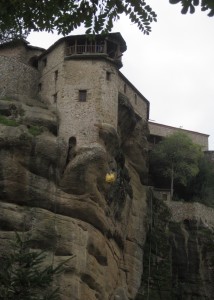 After viewing St. Stephen’s, we drove to the Varlaam Monastery, named for the anchorite who first settled on the rock in 1350. Two wealthy monks, Theophanis and Nektarios Apsaradas, erected the original chapel in 1542, and the Theban iconographer Frangos Katelanos decorated the chapel in a style influenced by the Italian renaissance. Legend says that it took 22 years to hoist all the building materials to the top of the rock.  Today things go faster, thanks to a motorized winch, and the monastery is constructing a new museum.  Economics has changed monastic life, for the the monks of Varlaam rely on tourists for their income.  Instead of rising to the monastery in a basket, the visitor walks across a bridge and climbs a set of well-laid stairs. After our visit, I was cold, and happy to drive to the Meteora Restaurant in Kalambaka for a hot meal and our drive to Athens.