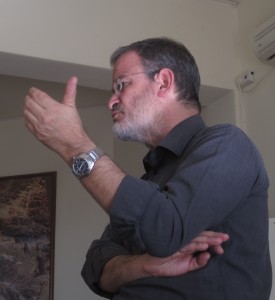 Rev. Dr. David Mark Neuhaus, SJ is Latin Patriarchal Vicar for Hebrew Speaking Catholics in Israel, a part of the Latin Patriarchate of Jerusalem.  On November 27 he lectured to the Tantur Group on the topic, “Challenges of New Christian Communities in the Holy Land.”  Then, on November 30, he lectured on “Land, History, Bible: Towards the Land that I Will Show You.” He also sent to us an article entitled “Jewish-Christian Dialogue and the Question of the Land of Israel” (2015).

Born in South Africa, he is a member of the Society of Jesus (Near East Province) and teaches Scripture at the Seminary of the Latin Patriarchate of Jerusalem in Beit Jala and in the Religious Studies Department at Bethlehem University. He completed a BA, MA and PhD (Political Science) at Hebrew University, Jerusalem. He then completed pontifical degrees in theology and Scripture in Paris (Centre Sevres) and Rome (Pontifical Biblical Institute).  Neuhaus shared with us his reflections from 2007 on the opening of Yad Vashem, the holocaust museum in Jerusalem. His publications include Justice and the Intifada: Palestinians and Israelis Speak Out (edited with Kathy Bergen and Ghassan Rubeiz), New York, Friendship Press, 1991 and (in collaboration with Alain Marchadour), The Land that I Will Show You…Land, Bible and History has been published in French (2006), English (2007) and Italian (2007).